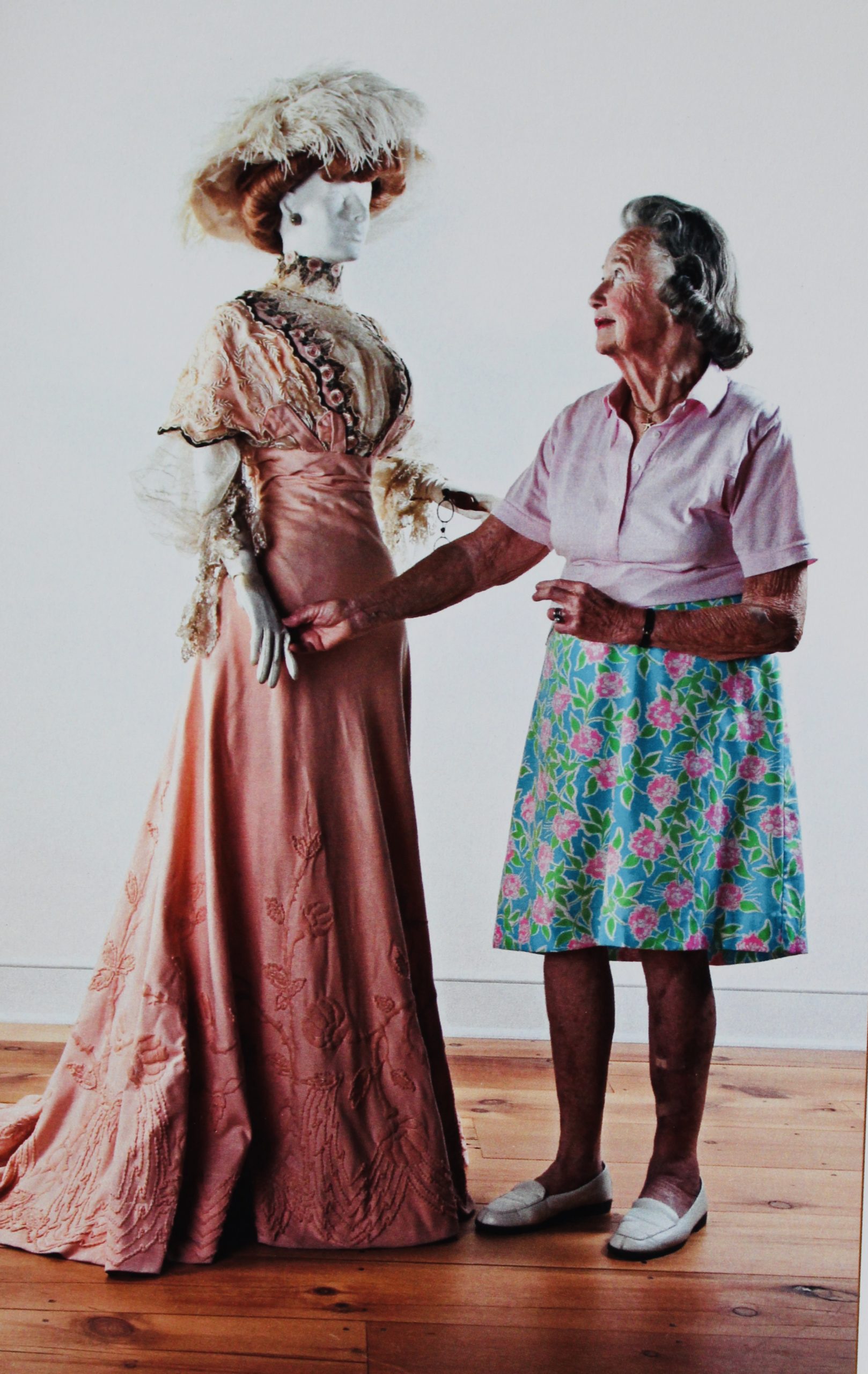 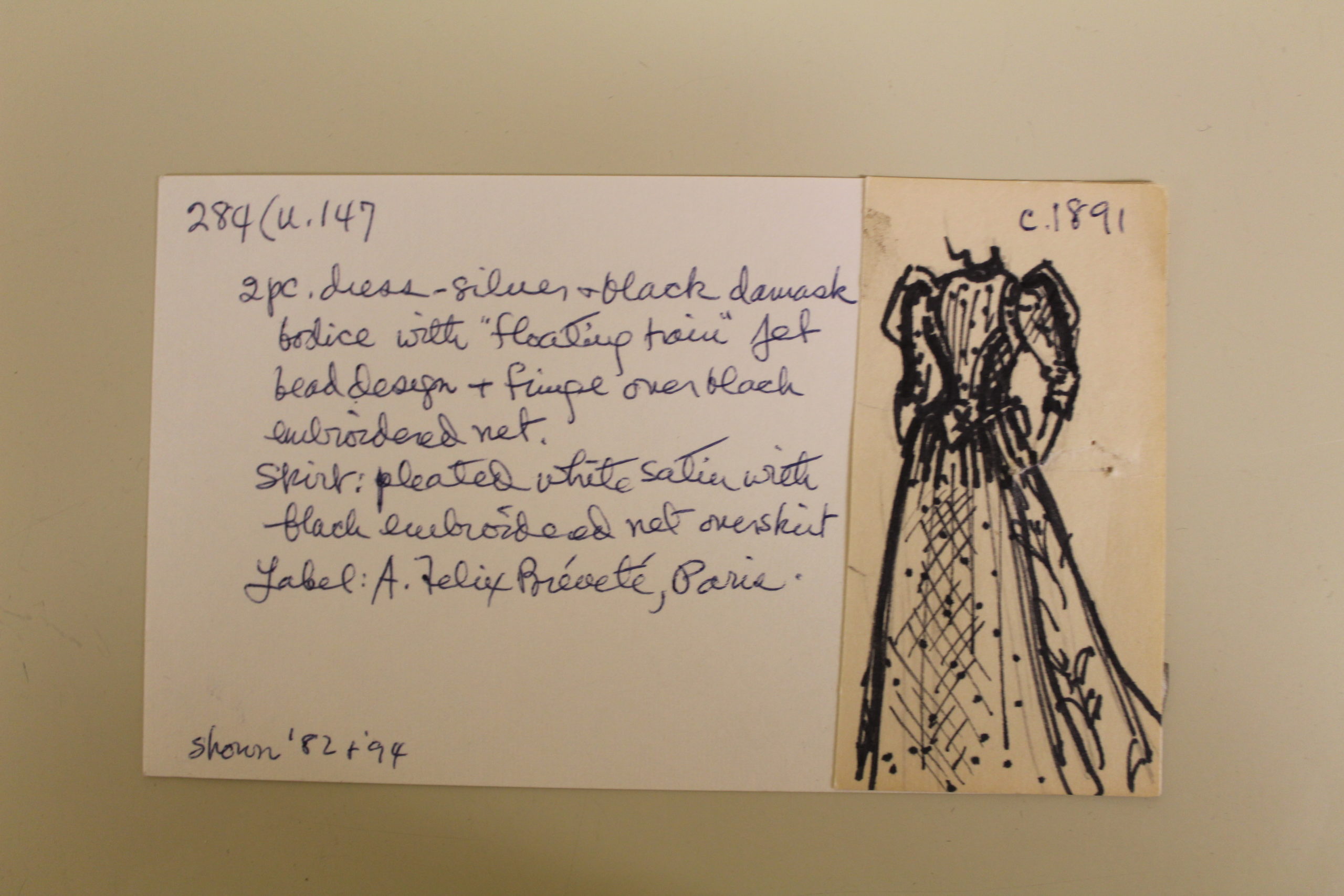 Built Museum’s Collection to One of New England’s Finest

Trends come and go, but a true classic stands the test of time. No one exemplifies that fashion truism more than Babs White, the Museum’s widely respected and well-beloved Costume Curator who recently announced her retirement after nearly a half century.

“It’s been a lot of fun,” said White, who recently celebrated her 95th birthday. “The collection has been the focus of my life.”

With over 3,000 items, including antique dresses, shoes and accessories, the Museum’s Costume Collection is recognized as one of New England’s finest, and experts throughout the region have long sought out White’s guidance on exhibitions and fashion history.

Since joining the Darien Historical Society in the late 1960s, White has curated fashion exhibitions at the Museum on a nearly annual basis. A former fashion illustrator for Women’s Wear Daily, White has been widely recognized and lauded for her scholarly attention to detail and her creative interpretations.

Plans to honor White and celebrate her years of service to the Darien Historical Society (recently renamed Museum of Darien) will include officially renaming the Costume Collection in her honor, said Robert J. Pascal, Jr., president of the Museum’s board of directors.

“Babs White has been a guiding light of this Museum. She has an encyclopedic knowledge of history and an unrivaled fashion expertise,” said Pascal. “The Museum – the entire town — owes Babs a debt of gratitude because, while at the helm, the Museum has amassed a Costume Collection that is recognized as one of the finest in New England.”

Born in Haddonfield, NJ in 1925, Barbara Ann O’Donovan graduated from Smith College in 1946 with a degree in Art History and soon landed a job as a fashion illustrator for Women’s Wear Daily, a fashion trade journal based in New York City that is still considered the “bible” of the industry.

“We would get a shipment from Paris, and I would run down and get a quick sketch and then finish it off back at the office,” White said.

“My wedding gift from the company was a week-long vacation to get married,” White quipped.

After starting her family — Babs and Robert would eventually have four sons, Peter, David, Tom and Robert Jr. — Babs increased both her salary and flexibility as a freelance illustrator before her husband, a graduate of Yale and vice president of Chemical Bank, was assigned to London, England, where the family relocated for two years in the mid-1960s.

Babs’ introduction to the Darien Historical Society’s budding Costume Collection came after she and her young family moved back to the United States and settled in Darien.

“That was the late 1960’s, and the curator at the time, Janet Jainschigg, knew I had a fashion background and asked me to be co-curator of the collection,” Babs said.

From that point on, the focus of White’s passion and expertise has been improving and adding to the Museum’s Costume Collection, and as her reputation grew, so did the Museum’s collection. Click here to view an online database and to learn more about the Museum’s costume collection.

“Many women made the often-times difficult decision to donate a beloved family heirloom to the Museum, mainly because they knew that Babs understood the history and the intrinsic value of the piece,” said Cyndy Stamm, a longtime member of Babs’ closeknit Costume Committee, which under the Curator’s guidance, met weekly for years to care for the collection, take in donations and plan exhibits. In addition to Stamm, other longtime members of the Costume Committee include Ulla Kremer, Linda Goodyear, Cindy Ryan and Lynn Sheppard.

Maggie McIntire, executive director of the Museum, said both the committee and staff are planning on how best to safely honor and celebrate White. More information on the plans will be coming soon.

“Babs is so well beloved — not only in town, but throughout the region — and she has been such an integral part of our Museum family so long, there will be many who will want to express their gratitude and share their memories,” McIntire said.